Story and photo by HALEE CRAM

Being partially responsible for the turnaround of two NFL football teams is not all that sets Chad Lewis apart from the crowd.

His life started out in New Jersey, where his dad was finishing service at Fort Dix as an Army doctor. When Lewis was 3, his family came to Utah so that his father could open a private medical practice.

His dad’s ambition inspired Lewis to be a hard worker, and throughout school he held many jobs. He started at 10 as a paper boy for the Deseret News, and continued working what he calls “odd jobs.” These included cleaning his dad’s medical office and being a bagger at Albertsons until he was ready to go on an LDS mission in Taichung, Taiwan.

“Missionary service, it changed everything about my life,” he says. “The important things came into focus.”

Originally, Lewis had wanted to play football for the University of Utah. He says it was his mission that inspired him to want to go to Brigham Young University in 1993 and focus on becoming a doctor instead.

Plans changed again when Lewis walked on to the track team, and eventually the football team at BYU. He excelled in football and was a WAC 1st Team choice for his sophomore, junior and senior year. Lewis says this means the coaches selected him as the best tight end in the conference. During his junior year, the United Press International group, a global online news source, selected Lewis as its All American Honorable Mention. This was notable because he had only played seven games that season due to a broken ankle. Lewis was healthy all through his senior season, and was ready to move on to bigger and better things.

He was signed as a free agent by the Philadelphia Eagles in 1997, but had only played for the team for a month before he was traded to the Rams. His playing skills helped the Rams achieve one of the biggest turnarounds that the NFL has seen. During the previous season, the Rams had been crushed by the 49ers in a 44-10 loss. A number of losses ensued and the team ended its season 7-9. However, in 2000, Lewis helped the Rams make it to Super Bowl XXXIV against the Tennessee Titans. The Rams won, 23-16. Although he had contributed to the team’s success, he did not play in the big game because he had been traded back to Philadelphia.

Lewis looks back on his relationships with the coaches of both teams fondly and explains that he learned a great deal from being a part of their organizations. The Eagles, who had also been near the bottom of the league, made it to the Super Bowl in four years with his help.

Lewis says the NFL taught him how important it is to surround oneself with great friends, family, music and information. He believes it is a dangerous thing to be surrounded by anything except greatness, because of the enormous effort it takes to do something important and realize a dream.

“You need a dream,” he says. “You have to have a goal because if you don’t have it, no one else will have it for you.”

After leaving the NFL in 2005, Lewis became BYU’s associate athletic director. He had been offered another season with the Eagles but turned down the opportunity. The biggest influence in this decision was his family. They wanted to move back to Utah and have their father home more of the time. Lewis wanted to grant them this.

In his work for BYU, Lewis still shows others his passion for athletics in order to raise money for the Athletic Department. He is responsible for all of the teams there. 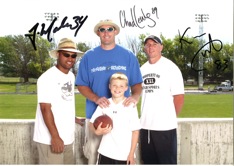 From left: Reno Mahe, Chad Lewis and Kevin Curtis, all former Philadelphia Eagles players, stand with one of their young participants at a BYU football camp.

Lewis contributes to BYU and football in other ways, specifically by participating in and teaching football camps for youth. He helps young kids learn football strategy and plays, while giving them an understanding of the way they should conduct themselves when they play any sport and in their daily lives. All of this keeps him busy, especially when accompanied with his other personal endeavors and family life.

Lewis is heavily involved in his own fundraising and charity work and hosts a golf tournament annually for Cystic Fibrosis to raise money for research.

His other charity project, which is based in Utah, is called American Indian Services. This raises money for Native American youth to go to college. Lewis says that learning the stories of Crazy Horse and Sitting Bull at a young age inspired respect for Native peoples.

Lewis dedicates much of his life to his family. He gets up daily at 5:30 to read, eat breakfast and get ready for work. But he says his “real day” begins after work, when he comes home to his family. Dinner, ball games and other activities constitute his night. His seven children, ages 2 to 15, all play sports, including volleyball, basketball, baseball, soccer and flag football. They have taken after Lewis and his wife, Michelle, who was a volleyball player for BYU when he met her.

Lewis believes strongly in getting out in the outdoors. He ran the 2011 St. George Marathon, and would like others to take the time to get exercise and go outside, especially in the fall. “Take advantage of the colors, get up in the mountains on a bike or walking,” he says. “Take the time to see the colors change. Use a sick day at work if you have to. Life is meant to be lived.”