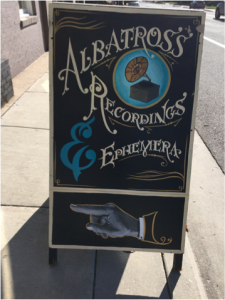 Hatziathanasiou was only 29 when he opened the first Albatross location. The original store was located in the back corner of what is now Diabolical Records. Originally from Utah, Hatziathanasiou moved to New York after high school for about 9 years. He opened the store when he came back in 2013, “After moving back I was just kind of drifting professionally and just personally trying to figure out what to do,” he explained, “As far as knowledge and skill set goes I kind of just combined it all into this. So yeah, opportunity came up in 2013 to share a shop, or to have two different shops in one space, so that was [for] about six months and after that I just decided to keep going.” The next year, in October of 2014, Hatziathanasiou moved to a store located at 9th and 9th and in January 2016, moved Albatross to its current location.

Hatziathanasiou explained that he believes the current location is by far the best, “As far as the space it’s much more comfortable, I like the separation into different rooms because I was able to create a different feel or space for each section. The structure is much more sound,” he said, “My neighbors on 9th and 9th were great but I wasn’t happy in the building, I didn’t enjoy spending time in that space at all. It never really felt right.” With neighbors such as White Elephant Boutique, Koi Piercings and Good Times Tattoos, the new location has a shared clientele.

As a kid Hatziathanasiou grew up around music, beginning to play guitar at the age of 7. He would ask his mother to drop him off at local record stores, such as Smokey’s records, while she would go grocery shopping. “I’m sure I was bothering all the employees there,” he chuckled, “but yeah it’d either be that or just Raspberry Records or other shops that aren’t around anymore. I just kind of grew up in record stores.”

Being around music all of the time, Hatziathanasiou gathers new sounds frequently. This year some of his favorite releases include Jenny Hval and Thor and Friends. Thor and Friends will be playing in Salt Lake City on November 19 and Thor will be doing a reading at Albatross that same day earlier in the afternoon. Hatziathanasiou tries to do events like these about once a month. He wants people to know that his door is always open from everything like performances, readings or other events.

The Albatross store is decorated very peculiarly. The walls are full of dark art that has been collecting over the years. The main room has Hatziathanasiou’s desk with a shelf full of records behind him, and a magnificent record player that has been engineered locally with some pieces from Seattle. “It’s my favorite part of coming in here every day,” he says, “I’ve just been kind of tweaking it you know just changing parts out and stuff so it’s been an ongoing project.” He described the speakers as being based off of the Western Electric 22a’s speakers or the sound of the theater speakers from the late 1920s.

Hatziathanasiou is always playing a record while he works. There is never an exact genre that he is playing; it’s different every day. In fact, unlike many record stores, he has no specific genre that he plays or sells. The variety of records in the store is wide. He even has been shipping records out of the country to places like Vietnam and Brazil. He gets his records from different distributors or even from the artist/label itself. The products in the store are mostly random. He collects things that he thinks sound well instead of trying to predict his audience. “I don’t do it anymore but I would think ‘oh yeah this is selling really well I should order more of these’ and it would always backfire.” Hatziathanasiou said, “Maybe just because it’s kind of cynical and you think you can kind of guess what’s going to work or guess your audience instead of just getting stuff that you feel is good… I don’t know how to describe it but. It hasn’t always backfired, but it seems like that stuff always sits longer than I expect it to.”

Hatziathanasiou has had live shows at the store, and plans on having readings, movie showings and even craft nights. His future plans include pressing records and using the name as a label. “I like the space and I’m happy to share it,” he said, “Otherwise, [my goal is] not just staying open but actually thriving.”