Story and Photo by Hailey Kirkwood

There is a tense silence upon walking through the sliding doors of my local Walmart, just five minutes before 6 o’clock. There are people crowding the aisles, but in an orderly fashion only making casual conversation. After running into several barriers set up by Walmart employees, we found ourselves caught in the middle of a tight cluster of people when the OK is given to start. That orderly fashion and casual conversation is replaced by loud screams and shoving almost in the blink of an eye.

For being a town as little as the one I am from, I was surprised to see the amount of chaos that was going on. Holding onto the back of my fiancé’s jacket while walking through crowds of people was like Jack and Rose trying make their way through the people of the Titanic. A group of Walmart employees along with two police officers frantically run past us towards the line for the DVD’s, obviously giving off the impression that something was going down. Seeing all of this made me think to myself, “Why is Black Friday taken to such the extreme? Why are we doing this on the same day that we are also supposed to be thankful for the things we already have?”

In an article published on The Balance titled “Why is Black Friday called Black Friday” by Kimberly Amadeo, I wasn’t surprised to learn of past incidents at other Walmart’s. However, these accounts include much more violence than what I had experienced in my small town Walmart. Between fighting over parking spaces and shoplifters, one account that I could relate to from Amadeo’s article was when one woman pepper-sprayed a crowd at a Walmart in Los Angeles back in 2011. According to the article, she was wanting to buy a Wii console and then pepper-sprayed a crowd in the electronics department. It made me think of my experience standing in the DVD/videogame line, wondering why they “ruined the fun” by making us stand in line and letting people browse in groups of ten. After being there and reading this article, I finally understand the purpose of the line. Even if you have to wait 30 minutes.

Black Friday is obviously a day where the worst can come out in people. The name itself has a violent meaning behind it. Amadeo also gives the background history behind the name, explaining that the day after Thanksgiving is originally called “Black Friday” because “So many people went out to shop that it caused traffic accidents and sometimes even violence.”

It’s no secret that Black Friday can get out of hand, so what are some of the reasons that people actually participate? Is it for the insane sales, or is it more for the “fun” of it? I befriended a woman by the name of Angela while standing in line for the DVD’s, and like most people who are casually waiting in line started the conversation by saying something like “Can you believe this many people are here?” As our conversation continued, we discussed the reasons why we were here. I explained how even though I was in search of a vacuum, I was mainly here for the fun of it as a part of an annual event that my fiancé’s family does. She went on to explain how she was actually there for the sales, in particular to buy videogames for her son for Christmas. While we agreed that being here for the fun of it or for the sales is appealing, the magnitude of it now is rather ridiculous (as we try to maintain our place in the line because of multiple people try to get ahead).

Although the day has become to be rather ridiculous, that can also be part of the appeal to Black Friday. On what other day of the year can you act like kids on a playground fighting for the same swing? Being able to do acts such as running through a crowd or playing tug of war for that new set of pots and pans is something that on any other day society would consider to be deviant and unacceptable. I myself am one to follow the rules, so much that some might describe me as being a “party pooper”. But having a day where you’re allowed to go a little crazy even appeals to someone like me.

Another aspect of Black Friday that not many consumers think about are the perspective’s of the employee’s. Rachel Gillett, a writer for Business Insider goes into more depth about what it’s really like to work on Black Friday. Gillett interviews a former Best Buy employee that supports Gillett’s statement that, “To call it the most hectic day in retail is an understatement.” 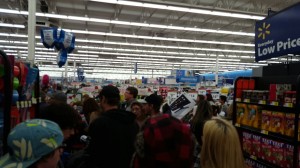 Shoppers fill the aisles at a Walmart in Price, Utah.

On top of the madness of the day itself, retailers are now starting their sales on Thanksgiving Day. So what is the motive to work on such a chaotic day? The interviewee in Gillett’s article describes the motive as being the pay as a result of the extra hours. The excitement of Black Friday for employees was also there, but Gillett’s interviewee goes on to explain how the more Black Friday has shifted to Thursday the excitement started to dissipate. Gillett’s story also covers the preparation, handling, and aftermath of the day from this specific employee’s experience and how what used to be just a hectic work day turned into intervening with the Thanksgiving holiday.

We can all agree that Black Friday is a “holiday” that can be both beneficial for saving money, and fun as being a part of the excitement. However, it has been evident throughout recent years that Black Friday has turned places like Walmart into a battleground and how employees are wanting to be less a part of the war. So much that the image of running into the store like a pack of wild animals might soon fade, since long lines are becoming more prevalent for obvious safety reasons.