But, attending the school at the Local High School, there was a QSA that was denied, and with help of ACLU got approved after a long fight with the faculty of the Washington County School district in St. George Utah.

The QSA that is the topic of this paper is the small town High School’s Gay-Straight Alliance club. For people who don’t know what that would entail, it is a club that bands together LGBTQ and heterosexual students. And creates a safe space and time to talk about their school experience as well as find peers who they know would accept and befriend them.

A year before I joined the club, and became its Vice President and then President, my peers were fighting to start the GSA. The faculty of a St. George High School did not believe that it was an appropriate group to have on campus. And refused to let the club form. A fellow student, who we’ll call Jane, fought to have that overturned. She got into contact with ACLU and asked for help. Could they please help us form a GSA, in our relatively small town, whose citizens were (for the majority) LDS?

In the LDS religion, they do not believe in people being LGBTQ, for the most part. (Not all LDS members are like this. In fact, quite a few LDS friends who are open minded and amazing.) But, unfortunately, not all members are the same in this stance.

Additionally, it is hard to say if the LDS beliefs interfered with the faculty not wanted the group on their High School campus, but one can speculate.

And interviewing the Teacher, Mrs. Johnson*, who helped start the club right in her classroom, I asked: Did you ever get pushback from any of the faculty/districts about the GSA originating? How did you respond?

“No pushback.  The pushback came before I was involved.  Several individual school administrations were making it very difficult for students to start GSA clubs, and the ACLU came to St. George and met with the district administration.  After that meeting, the schools were instructed to allow GSA clubs to form while following the same district extra-curricular club rules as other clubs.”

I also asked, When moving schools, are you still active in their respective GSA’s?

DHHS didn’t have an active GSA when I arrived last year.  I had a few students approach me about my willingness to advise a club, and I told them, of course, I’d be the advisor. Nothing ever manifested from their interest.

This year, another student approached me and this time that student followed through and filed the necessary paperwork with the office.  The club was approved and we are officially a club beginning in January.  I hope there is the same kind of connection and safety as there was at PVHS.

“Is that like the Girls Soccer? Something? Ha-ha, I don’t really know.”

And a recent graduate (class of 2015) if he knew of the GSA, John* stated, “Oh yeah, it’s like the gay club or something. They are cool.”

It is easy to see that there was a large controversy and a lot of people had to get involved to get a club that many people are not even aware of or care about were all for nothing. But to those who went to the club, it held high importance. Asking Mrs. Johnson a few more questions I purposed the question,

What is your favorite part about being in the GSA?

“Getting to know students was always my favorite part.  It also made me happy knowing that my classroom was indeed a safe place for kiddos to congregate and a place that they knew they were accepted for who they were.”

So, in the end, it is clear to see that, thought there was struggle to from the club, in the beginning, there is no reason for the club to be a controversy again to those at that little High School. 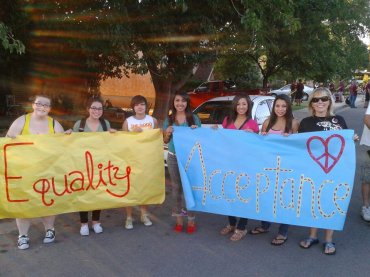