SALT LAKE CITY – On a chilly morning in April, 2005, Abimael Lopez crossed the border from Mexico to the United States. He ran seven to eight hours up and down the hills as prickly bushes scratched his feet. There was no time to stop. 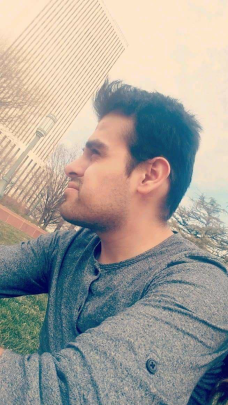 Lopez and 23 others finally took a break from running after they found an underground cave. They rested for about two hours and were awakened by the sound of a helicopter. “We got caught,” Lopez said. They were taken to a Border Patrol station in the U.S. where no food or water was provided until deportation. “Kids younger than me were crying, because they were hungry, tired, and cold,” he said. Lopez waited for two weeks in a town called Agua Prieta in Mexico before trying to cross again. When it was time he began to run. This time he was successful.

Lopez left behind his friends and the rest of his family at 14 years old to reunite with his parents, who had been living in Utah for 10 years. His parents came to the U.S. to provide for him and his siblings.

“I was happy in Mexico, but I wanted to be with my mom,” said Lopez, now 26. “I don’t think my life would have been better if I had stayed in Mexico, jobs are extremely hard to find and the pay is not that much.”

Born in Venezuela, Olivo came to the United States when she was eight. “I lived a pretty good life in Venezuela,” she said. Venezuela was in the midst of a financial crisis, however, and soon thereafter her mother lost her job.  Olivo, her older sister, and her mom decided it was time for a better life. After living comfortably in Venezuela, they came to the U.S. with nothing. “The language barrier was a struggle, just because you feel so useless and lonely,” she said.

Lourdes Rosas, who is from Guatemala, says growing up there was hard because they didn’t have much money for food. Rosas came to the U.S. with her parents and siblings at age nine. “I had to leave my whole family in Guatemala, and if I had stayed I would not have had the opportunities that are available to me now,” she said.

In 2012 President Barack Obama issued an executive order called Deferred Action for Childhood Arrivals (DACA) which enabled many children who came to the U.S. without authorization to work and attend college. Those who qualified for DACA were also protected from deportation, but were required to renew their permits every two years. DACA gave Lopez, Olivo, and Rosas the opportunity to apply to college and to obtain higher paying jobs. “I applied to have a bit of peace of mind of not being deported” while she pursues a degree in biology or chemistry, Olivo said.

On September 5, 2017 the hopes and dreams of many DACA recipients and prospective participants were shattered when the DACA program was ended by the Trump Administration. “I felt an awful feeling of dread,” “I was in shock,” “I got scared,” said Olivo, Rosas, and Lopez, respectively. “This placed has become my home, we were raised here, the only difference is that we weren’t born here,” Olivo said.

Since the removal of DACA, many in the media have blamed the parents for bringing their children to the U.S. “As a parent it is terribly hard to be apart from our children,” said Mercedes, a 47-year-old parent of a DACA recipient. “We bring them along to give them a better life while being by their side.”

Mercedes decided to come to the U.S. knowing the struggles she would face in a country that she didn’t know, but her children were her motivation. “I worked hard so I could give them an opportunity to study and not worry about money,” she said. Christy, 43, is another parent of a DACA recipient. She came to the U.S. with her husband and children after her husband lost his job. “We want our children to be better than us,” Christy said. “We brought our children here because it was beneficial for them. There are more opportunities for them here.”

Congress has until March 5, 2018, to act on a law that will protect all of the DACA recipients, also known as “Dreamers,” from deportation. Christy says that many of the Dreamers are worried they won’t have a chance to finish their higher education. Olivo, Rosas and Lopez are hoping for a law that could provide a pathway toward citizenship.

“You’re used to believing that there is no difference between you and others, but moments like this make you feel like you are not equal or that you don’t belong here,” Olivo said.

Anticipation runs high among the Dreamers to see what Congress will do to protect them from possible deportation. “All we can do is wait,” said Lopez.