Story and photos by MEGAN CHRISTINE

When members of The Church of Jesus Christ of Latter-day Saints are excommunicated, they are stripped of their membership, much of their personal identity, and the chance to see their loved ones in heaven after death.

This is what happened to Margaret Toscano, 69, when she wrote and spoke about issues regarding women’s place in the Mormon church and related topics such as the priesthood.

Many people like Toscano have been raising their voices against the inequities they feel women experience in the Mormon church, whether that be through research and writing or making small changes in their home churches.

Toscano conducted research as an undergraduate student at Brigham Young University on church history and found that “the women that received their temple endowments through Joseph Smith all knew that they had priesthood.” Toscano believes that in the 1800s, Smith ordained women with the priesthood through religious ordinances called temple endowments.

According to the Mormon church, the temple endowments are considered “a gift from God whereby He bestows sacred blessings upon you.” Today, these gifts do not include priesthood.

“If there’s going to be any equality for women, then you have to question the notion of priesthood,” Toscano said.

To Toscano, women need to be granted the priesthood again in order to be equal to men in the church. She has found that church leaders disagree with this.

Toscano spoke out about her beliefs and church leaders claimed she was in opposition to the teachings of the church. She was summoned to a religious court, conducted by local church leaders. She was told that she could either denounce everything she had written, apologize for the testimonies she had destroyed, and never speak out on these issues again, or be excommunicated. She chose the latter.

Marjorie Smith, 35, and Joseph Peterson, 35, are a married couple located in Salt Lake City who have similar views to Toscano. Smith is a member of the Aspiring Mormon Women group on Facebook.

Smith views the priesthood as an “entry between you and God.” To her, it seems unfair that women have to go through another person just to achieve that connection.

Peterson agreed. He has the ability to give his son and wife blessings when they are sick, but realized that when he is sick he cannot receive this same blessing from his wife.

“As rooted in selfishness as that was, it was a light switch that opened my eyes to a lot of other things. Women are not visible in this church,” Peterson said.

Smith and Peterson made the decision together to give their son a baby blessing after he was born. Smith felt excluded from this important moment, because according to church doctrine “only worthy men who hold the Melchizedek Priesthood may participate in naming and blessing children.”

Peterson included Smith by naming her as a blessing giver by stating that the act was “our blessing to you.” This small but meaningful act received positive feedback from fellow churchgoers.

Smith also taught lessons to young women in the church. She had to teach lessons on the law of chastity, which “prohibits all sexual relations outside marriage.” While teaching, Smith reconstructed these values to be moral instead of religious. She also taught the importance of education whenever possible. Smith avoided the subject of marriage, which is often the focus of many of these lessons.

Small steps can be taken to further the feminist movement in the Mormon church. Smith and Peterson believe visibility for women is crucial. Smith also values hands-on fathers and hopes the church will honor women’s need for education and women’s skills by utilizing them.

“If we mean what we say about women, they need to be visible,” Peterson said. “It’s that sort of over-syrupy, benevolent praise that is used as a tool to keep the structure the same and to defend the status quo.”

Peterson is referring to a 2018 article by Salt Lake Tribune reporter Peggy Fletcher Stack. While interviewing the new all-male leadership about women’s roles in the church, Russell M. Nelson began by saying “We love ’em.” Leadership continued to praise women as mothers and daughters, but did not mention steps the church is making toward gender equality or “even hint at the word ‘feminist.’”

Similarly, Toscano said that feminism in the Mormon church comes in waves, and at the end of each wave a woman is excommunicated to subdue the movement. In the 1970s, it was Sonia Johnson, Equal Rights Amendment advocate. In the 1990s, it was Toscano herself. In 2014, it was Kate Kelly, co-founder of Ordain Women.

Toscano firmly believes that the movement will resurface again soon. “You can’t keep women down.”

Prof. Margaret Toscano in her office at the University of Utah.

Women and Authority by Maxine Hanks, another book in Prof. Toscano’s library. It is about women’s views on feminist theology and women’s issues in the 1800s.

Voices for Equality, a book advocating for women to be ordained that is in Prof. Toscano’s collection. 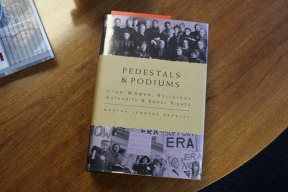 Pedestals & Podiums, a book written by Dr. Martha Bradley on the history of Mormon feminism. It includes topics like the Equal Rights Amendment and creation of the Relief Society.