Story and gallery by SPENCER GRAY

Worth McCleery, founder of the Village Baker, has been serving his famous homemade bread to locals for almost 25 years.

“People would travel from all over the valley,” McCleery said in an interview. “Word spread quickly about the bread we were making, and others just had to give it a try.”

The Village Baker has seen tremendous growth over the last few years. McCleery had his main location in West Jordan for almost 15 years before he decided to franchise.

The Village Baker is a place that people go to not just for the sandwiches, pizza and dessert, but also for the environment and feeling they get when they walk through the door.

Keenan Burnett, current manager at the original location in West Jordan, discussed what exactly the Village Baker brand means to him.

“Family, tradition and hard work,” Burnett said. “We’re all friends there, which allows us to have more of a positive environment.”

The Village Baker has been a family-run business from the beginning. McCleery hired a lot of his siblings to work at his original store to maintain that brand of love and family strong in his store.

But since the opening of the store located in West Jordan in 1994, McCleery and his crew soon outgrew their shell.

“Lunch rushes were crazy all day, every day before we opened the dining area in the original location,” McCleery said.

So in 2013, McCleery and his team finally decided to franchise their bakery, opening their second store in Sandy.

Since then, McCleery has opened three more stores in Lehi, Herriman and downtown Salt Lake City to meet their customers’ needs for their well-known bread.

Jordan Watko, general manager of the new Salt Lake City store located at 111 Main St., has been with the Village Baker since the original location in West Jordan.

With their slogan being, “It’s the Bread,” it’s no wonder why so many people find themselves as another one of their daily customers.

However, with the popularity that comes with the Village Baker’s bread also comes the responsibility to keep their recipe consistent across all franchise stores.

The Village Baker bakes its special, homemade honey bread fresh every morning. Thick slices are used for sandwiches. The bread also is sold by the loaf, attracting flocks of repeat customers daily.

Watko said customers’ favorite bread is honey white, followed closely by honey whole wheat and two types of cinnamon-flavored bread that are baked only on Friday and Saturday. With 13 different flavors, customers definitely have their favorites.

“It’s comfort food,” Watko said about the bread. “At its core, its grandma’s recipe. People love the bread because it’s a good balance between wholesome and nourishment, but at the same time it’s like cheat day.”

When asked about the repeat customers at the original location, Burnett said, “Oh yeah. I usually see my regulars almost every day. They might skip a day or so, but a lot of them I see at least four to five times a week.”

With so many people in love with the brand and the bread, it was scary for McCleery to franchise his stores because it opened the door for that brand to lose its reputation and taste.

“When you know that your customers are depending on your food to taste the same and offer the same experience at all locations, it was a challenge for a small mom and pop store like ours,” Watko said.

In order to provide the same experience to all customers across all locations, it requires the brand to stay consistent as well.

“Our brand represents years of hard work, with a lot of great people demanding a quality experience and taste,” McCleery said.

As far as the future of the Village Baker and their bread goes, McCleery has high hopes for his family-branded bakery.

“I imagine in 10 years, the Village Baker will have grown to more than 20 new stores across multiple states,” McCleery said. 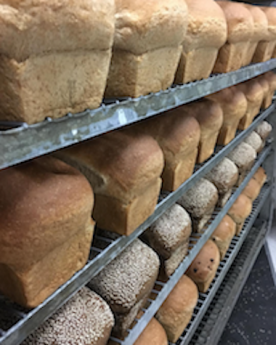 The bread before it is sliced and served to the many fans of its homemade taste. 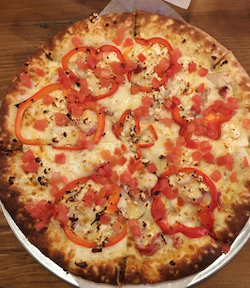 The Village Baker will bag its bread to give its customers the chance to take the homemade taste back to their own home.

One of the newest stores in downtown Salt Lake City, offering a beautiful modern design with a multilevel experience.

The outside of their first franchised location in Sandy.

The original location where it all started. After renovation, the Village Baker decided to remodel, adding seating for a dine-in experience for their customers. 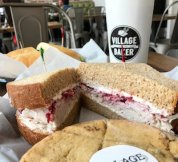