Ethan Cisneros should have been out of breath.

Like all 20 year olds faced with another day of multitasking, the University of Utah student was rushing through the motions of class and work. But unlike most on a recent Wednesday afternoon, Cisneros found himself in between classes hustling to Fox 13 News Station’s studio. The baby-faced junior was there to film a segment for the station’s afternoon feature, The Place, which showcases small local businesses.

Cisneros, 20, is excited to showcase his company, Thirst.

Cisneros had a new haircut and was dressed to impress with a striped polo. It was clear this young entrepreneur meant business. Stepping out of his truck packed with catering menus, bins of Torani syrups, soda and fliers, he was fully equipped to pitch the impact his soda shop, Thirst, is making on Salt Lake City.

He finds his comfort in operating a shop that runs on the concept of making a “happy impact.”

Cisneros is a contributor in a wave that seems to be spreading throughout the Salt Lake City area. Young entrepreneurs, both enrolled in school and not, are leveraging social media and a vision to launch businesses. And making money doing it.

The traditional education system is designed to bolster the workforce, but Generation Z, which has an age range from six to 23, has rearranged the progress from school to work. In Salt Lake City, there seems to be a ripple of eagerness within this age group – a crescendo of young individuals moving toward a less traditional path.

From lemonade stands to soda shop

Cisneros began his entrepreneurial climb at 7, when he would ride his bike to the store, purchase lemonade, and sell it at a stand in his neighborhood. He recalls standing on the street and dancing around with a sign to attract customers.

He learned to ride his bike at 2, because, “When you’re a businessman, you need to be able to get around,” he said. At 10, he and his neighborhood friend wanted to make some money, so they started a lawn mowing business. “Zack and Ethan’s Lawn Mowing” grew over the span of six years, but by then, Cisneros was ready to move on.

During the 2014 Christmas season, he thought he’d try his luck hanging Christmas lights —  and he ended up with another business. But as the snow melted and summer came around, he noticed a hype around shaved ice shacks. His curiosity sparked, and Cisneros scoped out prospects – and potential competition. He sat at a local shaved ice shack and observed the operation, watching the lines and counting customers.

Shortly after, “Olympus Ice” was born. Lively music drew in high school students to the shack throughout the summer. They gathered under string lights at picnic tables, playing board games and “Twister” as they enjoyed their frozen delicacies. Come winter, Cisneros started his light-hanging business back up. He continued this seasonal cycle throughout his high school career. Little did he know, however, bigger opportunities were headed his way.

When Cisneros turned 18, his business partner reached back out to him. She said she had noticed the long lines at soda shops such as Swig and Sodalicious.

“Girls were driving all the way out to Provo for this stuff,” he said.

His ambition kicked in, and he began visiting all of the soda shops he could find in Utah, and soon learned there wasn’t one in Salt Lake. That’s when the idea for “Thirst” was born.

Cisneros developed plans, secured a location and assured his business partner it was a good investment.

“If you invest in this, I won’t let you down,” he told her. “Either this is going to succeed or I’m going to die.”

Cisneros had a clear idea of what he was getting into.

“I told myself, ‘This is not a lemonade stand anymore, this is a big deal,” he recalled.

A few blocks east of the Salt Lake Bees Stadium, Thirst’s bright orange roof cannot be missed. A long line of idling cars waits to reach the drive-through window, where customers order drinks such as the “Dr. McCreamy” and “Frat Star,” or sweet treats such as their signature “Scotcharoo.”

Inside the shop, Cisneros mixes drinks and serves smiles from the 8:30 a.m. open to 9:30 p.m. close, leaving only to make it to class on time. Thirst has been in business for nearly three years, and Cisneros spares no effort to keep its three locations running. Work is all he knows, and he expressed that it’s what makes him comfortable.

“I want to build massive success and prosperity, and I like to match my work ethic to my words,” he explained. 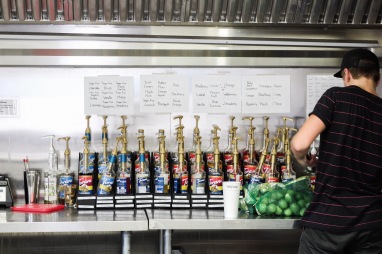 Cisneros mixes Thirst’s signature drinks for his customers. He enjoys being involved in the day to day operations of his shop.

It was this eagerness and determination that brought Cisneros to the lobby of Fox 13 News, anxiously prepping his equipment for showcase.

Cisneros anxiously awaits to be called into the studio to begin filming. 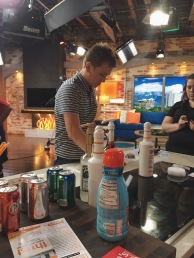 “I wonder if Big Buddha remembers me,” Cisneros said, in reference to Thirst’s Fox feature with Big Buddha from last year. “He likes my photos sometimes.”

Cisneros takes a story for Thirst’s Instagram account. He actively keeps his followers engaged in what he’s doing.

He pulled out his phone and began taking a video for Thirst’s Instagram story. These Instagram updates are constant throughout Cisneros’ day to day – he prides himself on keeping his followers engaged and informed of what he is doing. An advocate of social media marketing, Cisneros is convinced that for his target demographic, nothing else works. He interacts regularly with his 3,000-plus followers, delivering to them a bona fide customer experience inside – and outside – his shop.

One evening, Cisneros recognized the driver of a car involved in a nearby accident as one of his loyal customers, and went out of his way to hand deliver her favorite drink to her at the scene of the accident. It’s this extra effort that helps build Thirst’s reputation for stellar customer service.

As each car pulls up to the drive-thru window, Cisneros greets it with a smile. He models his friendly interactions with his customers after his company’s mission statement: “Make a happy impact, one experience at a time.” With Cisneros’ level of enthusiasm and animation, it’s no wonder customers are driving away with a grin on their face. This contentment permeates the kitchen as well.

One of Cisneros’ employees, Conner Nelson, shared why he enjoys working at Thirst.

“It’s a pretty fun work environment, everyone just kind of laughs and has a good time,” he said, adding that he admires Cisneros’ work ethic. “I don’t really know how he does it to be honest.”

But Cisneros’ busy schedule doesn’t stop him from maintaining a healthy and happy workplace. Even as the boss, he remains friends with his employees, promoting teamwork through staff parties, movie nights and retreats. He even plans to take his team on a weekend trip to St. George.

Cisneros is thriving in the era for entrepreneurs when essentially anyone can buy something and resell it online. Through the indisputable power and reach of social media, as well as the drive and ardor that’s surging among the younger generations, the possibilities are endless. Young high school graduates no longer need to follow the long-established path laid out by their predecessors.

Cisneros has plenty of advice to give when it comes to entrepreneurship, and he emphasizes the importance of being willing to put in the work.

In Cisneros’ case, this desire for success has driven him from the moment he set up his first lemonade stand. He is working to develop a set of “sexy skills,” as he calls them.

“I’m getting my hands dirty doing it. I’m the one mopping the floors,” he said. “I’m gonna learn the sexy skills by not doing the sexy things, and then I’m gonna transfer those skills to a sexy business.”

Cisneros knows that he doesn’t want to run a soda shop forever, but he’s not ready to move on until Thirst is an undeniable success. However, he believes he will never be fully satisfied and hopes that Thirst will continue to prosper beyond him. When asked what sets him apart from the rest, his answer was simple: