My writing process for this piece was done almost completely in my head. Coming up with the original idea I looked for topics that I believe needed to be addressed. From there I keep that thought in the back of my mind and mull over the different approaches I could have towards the topic and the ways that I could write the piece. Once I have the topic and the direction I want to go with my writing I keep an eye out for first-hand accounts that can be used for sources in the article. I thought it would be really interesting to see from the side of those who were running the program to those who came with their families and got to participate in the program. My sources were fairly easy to get an interview with because my piece wasn’t exactly controversial and only displayed them and the library in a good light.

Overall the hardest thing I think was narrowing down the information I got from interviewing people at the library. I had talked to multiple translators but, didn’t want to include all of them and I talked to probably a dozen patrons of the program and only needed one that I thought represented the group best. The thing that surprised me the most about writing this article and getting all this info from people is that it was almost entirely positive. I thought that with the large variety of people that I interviewed that at least a few would give some issues about the program or think that it was still too little attention being given to the Chinese patrons. Only one of my sources stated anything slightly negative and he was more just calling my attention to the fact that the program had a few Chinese characters that were written incorrectly. Writing this piece was much more smooth than I thought it might be. I was able to talk to the administration people that I wanted to and had very little resistance from the patrons I asked questions. I knew my piece would depend on interviews more than anything else so I am extremely happy with how willing people were to help with the article. 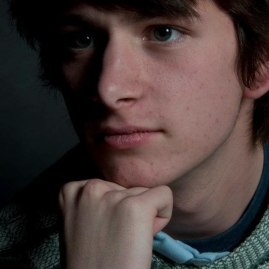 As a student majoring in journalism at the University of Utah, Porter Anderson looks forward to the career in journalism that he could have. He sets his sights on reporting stories from the gaming world and other sections of entertainment. He is expected to graduate in 2019 and will move from his job as a community outreach intern at the Family History Library in downtown Salt Lake.

Anderson has written two books, one of which has been published called “Built By Fear,” which is meant to be a tool for those struggling with social anxiety and other fears. He has a tremendous amount of passion for helping people through writing and tries to find as many ways to help people as possible.

Anderson has taken this passion for helping others and put it into his passion project, a website called Ureshii Outlet. He built the site as a place for people to come and share uplifting stories from their lives in an attempt to add a little more brightness and positivity to the world.

Prior to studying at the University of Utah, in 2014, Anderson spent two years living in Japan as a missionary for the Church of Jesus Christ of Latter-day Saints. During this time he taught English to the people of Japan and spent time learning the language from the local people. This time proved critical to his development in the field of journalism. Seeing more of the world gave a new perspective to the number of people that need to be educated about certain topics and even need help in different aspects of their lives.