Story and photos by RANDALL WHITMORE

As the days get shorter and the temperatures begin cooling off one thing remains constant at the University of Utah, electric scooters are still parked on nearly every intersection around campus.

As the school year continues, many scooters are being used on campus by students and faculty as a means of transportation. Electric scooters have become extremely accessible as they are often left all over campus. Students can easily access these electric scooters using their designated apps, which can be downloaded onto any smartphone.

Despite innovative transportation, some students and faculty believe that the scooters are endangering users and other bystanders. Recent U graduate Elan Maj calls the scooters “extremely dangerous.” According to Elan, the scooters are not properly repaired and present potential risks to users. “About a year ago I was using a scooter to get home from class. As I was close to my house the handlebars had fallen out of the scooter while I was riding and I crashed.”

Elan was not injured enough to go to the hospital but he did file a complaint with Bird, the electric scooter company he rented from. He explained that there is a designated area for reporting damage in the Bird app. Even though Elan provided pictures and a written statement, he could not prove that the damage was due to misuse. Bird refused to take further action or refund his ride.

The app provides an incentive program for charging electric scooters in which anyone can participate. There are simple instructions on how to get paid by collecting and charging scooters. However, these individuals may not be qualified to determine what mechanical issues may have occurred to a scooter. Elan believes that there are a large number of scooters that are unfit to ride; however, Bird scooters continue to circulate Salt Lake City and the U.

A May 2019 story in the Salt Lake Tribune stated each company is only allowed to have 500 scooters in the city at one time. With four separate companies renting scooters in Salt Lake, there are upwards of 2,000 scooters.

The Tribune reported the results of a comprehensive nationwide study of 2018 electric scooter injuries. The article explained, “Of the 249 patients who received treatment for scooter-related injuries, nearly 28 percent suffered contusions, sprains and lacerations. About 30 percent had fractures, and just over 40 percent were treated for head injuries.” In addition, “94.3% of observed riders in our community were not wearing a helmet.” Electric scooter accidents accounted for more injuries than bicycle accidents and pedestrian injuries during the study period.

Just how safe are these electric scooters? Abigail Yensen, a nurse at the University Hospital, stated, “We have seen a number of patients in the ER as a result of electric scooter accidents. We have treated patients with injuries to collarbones, wrists, shoulders, ankles, and severe scrapes.”

The U has strategically placed bicycle paths where faster moving traffic can efficiently move around campus. Speers said, “We pride ourselves on our designated bike paths which most universities around the country do not have. We believe this is why we have yet to see any accidents involving electric scooters on campus.” Speers said he is excited that no one has been hurt by electric scooters on campus yet. He believes that the scooters are relieving the parking lots and easing traffic during the busiest hours on campus.

Perhaps students are not reporting these incidents to Public Safety and instead taking matters into their own hands. Student Oscar Augustine who uses Bird scooters as a form of transportation admitted to being scared of other users of the electric scooters. He believes the scooters create a lot of fast moving traffic on campus with inexperienced riders who are not wearing protective gear. “I recently saw two girls riding one scooter who crashed as they exited a sidewalk near the stadium,” he said. Luckily neither woman was injured but Augustine said he fears that the scooters, which reach speeds up to 20 mph, could really inflict some damage.

Scooters literally piling up on campus.

If one falls they all fall.

Even the scooters are embracing the fall.

Commute from the parking lot directly to class. 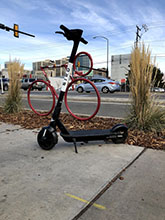 Birds conveniently placed all over the city for efficient transportation.

The scooters litter the streets of Salt Lake City.

Lack of reported issues results in scooters like this.

Broken scooters like this one are scattered all over the city.