Story and Photos by TUCKER SCOTT

In 1972 The University of Utah was donated $1 million by Robert L. Rice  to create a football stadium by the name of Rice Stadium.

Fast forward to 1997 when a Utah alumnus, Spencer Eccles announced that George S. and Dolores Dore Eccles Foundation would donate $10 million toward the construction of the new stadium. They agreed to keep the previous donor’s name along with their name as part of the new stadium called Rice-Eccles Stadium.

They started the remodel by replacing the stadium frame with modern steel, including a concrete and glass facility. The football schedule was never interrupted by the construction as they had it built in less than 10 months.

Since the previous rebuild of the stadium, Rice-Eccles Stadium has hosted a variety of events from concerts, super cross, monster jam, and also the 2002 Winter Olympics.

Since the last stadium expansion, Rice-Eccles Stadium has been home to the Utes for over 20 years, giving fans the experience they have always wanted.

In 2010 the Utah Utes received an invitation to join the PAC 10 Conference, which is now the PAC 12 conference. Since joining the conference Utah has gained a larger audience that attends the football games. For consecutive years they have been selling out the stadium and only having standing room only tickets available.

Then there was some buzz going around about another stadium expansion. Plans started to develop as the Athletics Program wanted to expand the size of the stadium by around 5,000 seats. The estimated funding for a project like this was around $35 million in donations.

On Aug. 13, 2019, the unexpected occurred. The Ken Garff family gifted Utah Athletics the largest donation in the history of Utah Athletics. They donated $17.5 million to the renovation of the new stadium. The other amount needed will be donated by several other revenue sources.

In a recent interview with Coach Kyle Whittingham, he said, “This really cements this project and makes it an absolute reality.” Whittingham expressed his gratitude toward everybody who is helping make this stadium expansion happen.

The number of seats that will be added will be around 5,144. The stadium currently holds a capacity of 45,800 and the Utes have sold out 57 consecutive football games. The plans are about 1,000 more stadium seating in the corners and the rest will be premium seating with terraces on each side of the goalposts, suites, loges, club seats, and rooftop seating.

The south bowl will be enclosed allowing fans to walk around the entire stadium without having to leave the stadium.

Ron McBride, the University of Utah head coach for the football team in 1990, took a team who was barely winning five games and turned the program around. In two years he took the program to the Copper Bowl, the program’s first bowl appearance in 28 years.  McBride said that he was excited to see the tedium expansion be complete. “This has been a long time coming,” he said. “We have been needing some more room for our fans to cheer us on.” McBride still attends the games on the sideline as he watches the team take on their opponents in Rice-Eccles Stadium.

One major thing that was discussed with the designers of the stadium expansion was seats. Fans wanted more seats so they could enjoy the game and not only be in the standing room only section.

Cade Carter, a student at the U, was late in buying his MUSS student section ticket so he has the standing room only tickets. Although he enjoys watching the games, he dislikes the fact that he has to stand the whole game. “I really enjoy watching the games and being in that type of environment, but I really dislike how much standing I have to do,” he said. “With the stadium expansion I really am excited to see how the seating will play out next year.”

With all this excitement about the stadium being rebuilt it has everyone anticipating the final result. The stadium is set to be finished in August 2021.

Fans watching the game from the stands, what a view!

View from the North End-Zone.

Moments before the game is filled with all of the Utah fans. 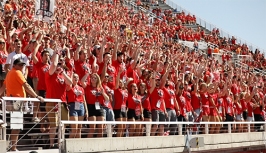 The MUSS student section cheering on the football team.

Solomon Enis with a touchdown.

Students at the University of Utah representing the Utes and their sorority.

Bleed Red through thick and thin.

University of Utah Offense huddles to hear the next play call.