Story and photos by VICTORIA TINGEY

She’s hosted Judy Garland and Adele. Wrestlers and ballerinas. But after being down on her luck and threadbare, the time has come for the storied Murray Theater to be great again. The plans to restore the historic building have the city reaching for the future.

Murray City purchased the 79-year-old structure with the purpose of rehabilitating it into a cultural arts facility, and bringing the building — which was placed on the National Register of Historic Places in 2001 — back to life.

Built during the Great Depression, the theater, which is located on 4961 South State St., opened in October 1938 and soon hosted live bands and film productions. The first film was “Alexander’s Ragtime Band” with Tyrone Power and Ethel Merman. Show prices were 20 cents for matinees.

“The facility captures the vision of a broad array of cultural facilities which are distributed throughout Utah,” Kim Sorensen, the Murray City Parks and Recreations director, wrote in an email.

The building’s unique design catches people’s eyes as they enter the city. This structure stands apart because of its age, architecture and charm.

View inside of Murray Theater from the balcony

“The façade is an excellent example of Art Moderne complete with rounded corners, horizontal windows and a vertical marquee that serves as a landmark along heavily traveled state street,” Sorensen said.

When asked how this structure will enhance the community, Sorensen addressed that because this facility would provide year-round indoor space, and programming options will expand significantly. It will provide a venue for both small professional and amateur ensembles made up of members from local orchestras and band organizations. 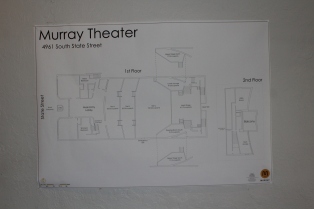 Layout of Murray Theater hung up in the Foyer

As the city looks at the plans to refurbish this structure, they are trying to look what will help create a long lasting concept that will draw people as it once did.

Jeff Martin, city facilities manager, said, “The City has asked for an assessment about the theater that includes: asking the community how to best utilize the space and what costs and upgrades will be needed to meet the community’s needs.”

The building was bought by the City in 2016. Their plans were to be able to repurpose this building so that they could positively enhance the downtown area of Murray.

“It’s not everywhere that a historic theater is owned and operated by a city, and one where they are actively looking to renovate and provide a fresh venue to their citizens,” Martin stated. 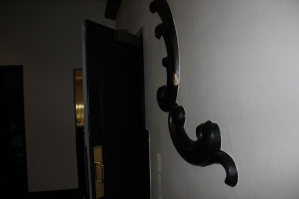 Detailed architecture in the front entrance of the Theater

The architecture helps to emphasize the old rustic feel when walking into the building. This building has played a big role in the history of Murray and they believe that it can still add value to maintaining cultural entertainment  and historic identities within the community.

Community members and visitors see the special features that add character to the city.

“When working, the neon sign on the front of the building puts out bright vibrant colors that light up the surrounding block. It really attracts your attention as you’re passing by,” Martin said.

There are other unique features about the building that Martin indicated including that there is an air handler that provides cooling and heating for the main theater room. The original fan is up to 6 feet in diameter and approximately 6 feet long. They included that the original motor still drives the belts that turn a large pulley to operate the fan that still works to this day.

They believe companies that create neon signage is a dying industry. It is harder to find people who can make repairs to the glass work involved and components to keep it operating. The color and light output that comes from these types of signs is really unparalleled. The city officials believe that these building gives a sense of how far the City has come. 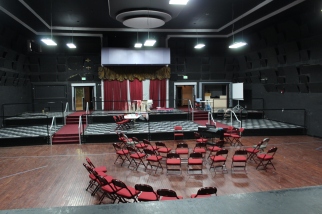 View of the Theater from the stage

“As I have worked with these buildings, some visitors came to watch movies at the theater when they were kids. While others attended events and concerts. Those memories tie into future generations and connections to build upon. It adds another aspect of how Murray is unique to its surrounding entities,” Martin said.

The reinvestment in the building is going to add to improvement of properties that run through State Street, an important corridor for the Wasatch front because of it’s big transportation roadway. Any enhancements that will be made will better the community at large. There have even been long term plans by state representatives to try to create more reinvestment in properties on state street because of it.

“This project will help revitalize our downtown area which is in dire need. It will be a catalyst to get things going, drum up the old history of Murray!” said Susan Nixon, the Associate Planner of Murray.

The city administrators are confident that the enhancement of the Murray theater will be an important catalyst for redevelopment of the downtown of Murray. It will add value to the social and cultural elements of the community. This project will bring the past into the future and make the area of Murray vibrant again.