Story and photos by KAELI WILTBANK

SALT LAKE CITY — Utah has recently been ranked the second most sexist state in the United States. Leading the pack of sexist attitudes is . . . well, surprisingly, it’s women. In a study done by economists at the University of Chicago, Northwestern University and National University Singapore, questions such as “Are men better suited emotionally for politics than are most women?” and “It is much better for everyone involved if the man is the achiever outside the home and [the woman] takes care of the home and family” were asked. 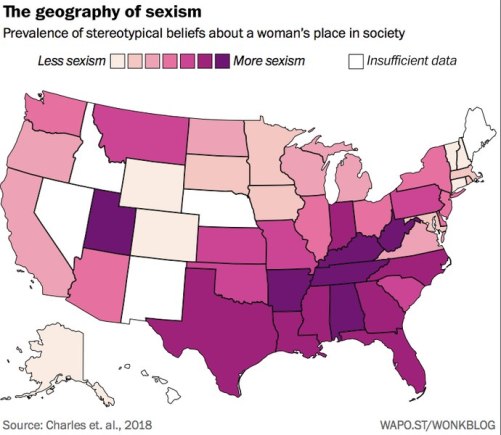 The study showed that the queen bees of Utah held their position as No. 2, while the men dropped, granted, still quite low, but to No. 5 in the ranking of most sexist states. Yes, that means the women of Utah are more sexist than the men.

don’t really notice,” says Becca Rettenberger, Operations Manager at a Salt Lake City-based marketing agency, Friendemic. Rettenberger continues to explain how our communities, our workplaces, our homes are all tainted with gender inequality and have been for as long as we can go back in the textbooks. Unfortunately, we’ve become so accustomed to swimming in it that we can hardly distinguish what gender inequality looks and feels like.

“From a business standpoint, I can list several different instances where I was working alongside other women or reporting to women,” says Rettenberger, “it was very much not an ‘I’m up here and I’m going to pull you up here as well so you have a voice at the table, it was a stay in your lane conversation the majority of the time.”

Why did Utah rank so high in the study on gender inequality?

Rachel Griffin, a professor at the University of Utah who specializes in race and gender studies, says there exists an inherent sexism in Utah.  “It’s not just gendered, it’s power-laden with religion.”

The strong presence of The Church of Jesus Christ of Latter-day Saints must be considered when analyzing the results of the study. “Akin to every major religion we have, Mormonism is deeply anchored in patriarchy,” says Griffin. “Feminism offers a critique of patriarchy, and most people aren’t a fan of being critiqued.”

Whitney Baggaley is a University of Utah graduate and stay at home mother. She is also a member of The Church of Jesus Christ of Latter Day Saints. “It’s such a social church. If every woman at church is a stay at home mom, there are a lot of social pressures surrounding that,” she says.

“Utah is the land of extremes,” says Baggaley, where stay at home mothers are extremely passionate about their role as wives and mothers, and the working women and the women in politics are equally passionate about what they do. Perhaps such an extreme spectrum anomaly creates an atmosphere where women have a hard time supporting other women who don’t do things the same way as them.

At an event hosted by the Communications Department at The University of Utah, Dialoguing Across Differences, a small group of community members discussed how to approach polarizing topics, such as politics, religion, and sex. The conversation turned towards discussing intentions. Perhaps you’re standing in line at the grocery store and someone in front of you takes a step backward, stepping on your toes. Did the person intend to step on your toes? Probably not. Nevertheless, those good intentions don’t take away the pain of your toes being crushed. Until we get the courage to tap our linemate on the shoulder and say “Excuse me, you’re stepping on my toes. That hurts,” the person may not see how their actions are affecting those around them.

There’s something to be said about intentions, they are a powerful driving force behind our thoughts and actions. While Utah is filled to the brim with well-intended women, perhaps we need to take a step back and see who’s toes we may be stepping on. No matter which side of the feminism line we stand on, there seems to be discord among the women of the state. How powerful a force we could be if we realized the pain we may be causing others by our good intentions, then found the courage to join together in mutual support, regardless of differences.