Story and Photos By: JAKE PHILLIPS

It was an oddly fitting picture of the former director of the Bureau of Land Management, who despite being out of government for 20 years, has water on his mind a lot these days. It was a rainy Thursday morning, and Shea, 70, was strolling to class.

Not on the University of Utah campus, where he’s been a research professor of biology and taught a class on urban streams for years, but at a local elementary school.

Every Thursday morning Shea teaches a class on water to fourth graders at Rose Park Elementary School in Salt Lake City. He arrived to a roomful of damp students who had just returned from recess.

As their teacher, Hannah Dolata, instructed her students to find their seats, Shea dried off his bushy white beard. He asked them what they had learned the previous week. The students couldn’t wait to tell him about the written equation they’d learned that showed how much water they used when showering or teeth brushing.

One student proudly exclaimed that if he brushed his teeth with the water running for three minutes and showered for 10 minutes he would have had used 52 gallons of water in the process.

“I try to conserve water every day because my grandma complains about the water bill,” said Valentine, 9.

Shea then asked the students what they should do after wetting their toothbrushes.

“Turn off the water!” the students yelled in unison.

While most elementary school students learn about the water cycle, Dolata’s fourth-grade class at Rose Park Elementary School is getting a much more in-depth education about water and how it affects them. With Utah’s less-than-abundant water supplies and growing population, water conservation has become more important than ever.

Along the Wasatch Front, Salt Lake City appears to be winning in its fight to conserve water. According to the 2014 Salt Lake City Water Conservation Master Plan, conservation has exceeded expectations and the overall trend is a reduction in water use in the area. Classroom programs like Shea’s are crucial in these efforts, the city’s Department of Public Utilities said.

Yet, with climate change and other environmental concerns an increasing reality to students both in childhood and their future adulthood, it’s especially important to teach children today about ways to address these issues, Dolata said.

While Salt Lake City has responded to calls to conserve water, planners expect the city will need to do more in the future. According to a University of Utah study conducted in 2017, the state population is expected to grow from 3.2 million to 3.9 million by the year 2030, an increase of about 22 percent.

If Salt Lake residents continue to use water at the same rate they did in 2000 Salt Lake City’s water usage is expected to increase by 23 percent by 2030, according to the Salt lake City Department of Public Utilities.

Shea asked the students about where the water they use every day comes from. He explained the majority of water in Utah comes from snow in the canyons. Then the children attempted to name some of the canyons near Salt Lake.

The class’ homework assignment was to look at the weather and to document whether it was an accurate report.

“The biggest problem for you growing up is figuring out what is true and is not true,” Shea said.

Shea wasn’t totally out of his element. It had been five years since he had last taught elementary students about proper water usage.

The daughter of a colleague, who Shea worked with on state water laws, was teaching fourth graders and challenged the research professor to speak to her class.

“The students are like sponges and want to learn more,” he wrote in an email.

A few weeks later, the professor was back, this time leading a field trip to a water treatment plant up Big Cottonwood Canyon. With Shea was Jacob Maughan, treatment plant operator, who led a tour of the plant and explained how the facility purifies water to make it potable. From there, the energetic children then returned to their bus and traveled to City Creek Canyon.

At City Creek Canyon, a popular biking and hiking destination for Salt Lake residents, the students were met by John Wells, who manages the city’s watershed operations. With students trailing behind, Wells led the class on a walk up a winding, paved canyon road while explaining why it’s important to protect the watershed.

He told students that dogs are not allowed in the canyon to protect the water quality in the streams that the city depends on. As the students fidgeted and chatted, Dolata, their teacher, stressed the importance of showing students the real-life connection to the water cycle. 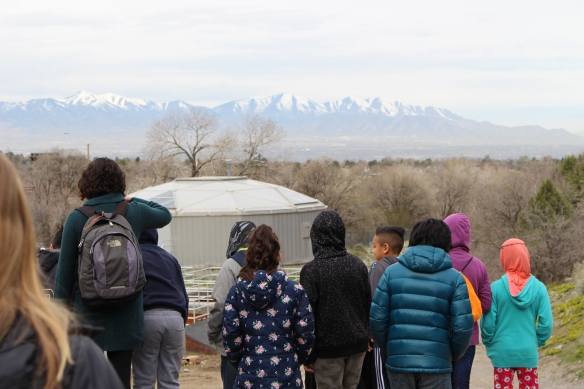 Hannah Dolata and her class overlook a water storage unit and the Salt Lake Valley.

Dolata’s class walk across a concrete platform that serves as water storage at the Big Cottonwood Water Treatment Plant. 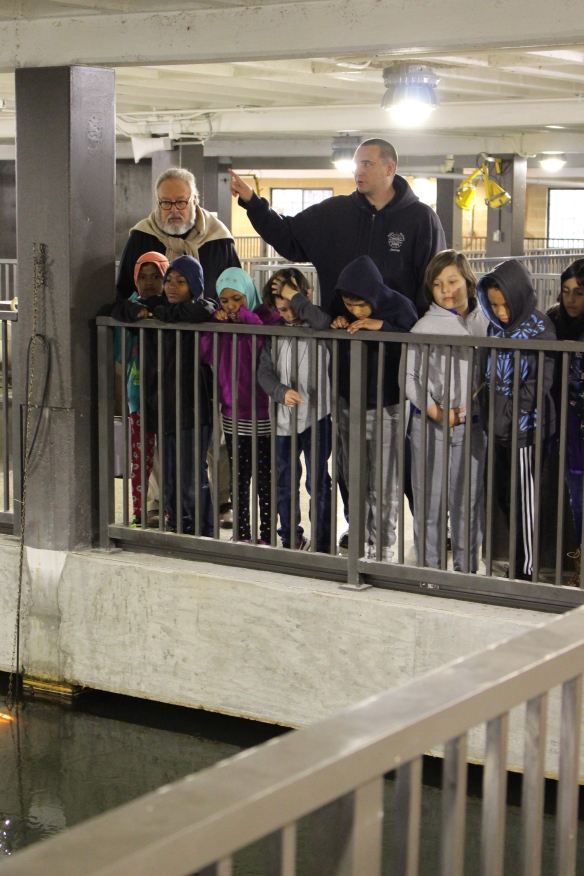 Patrick Shea looks on as Jacob Maughan explains how snowmelt is cleaned and transformed to drinking water. 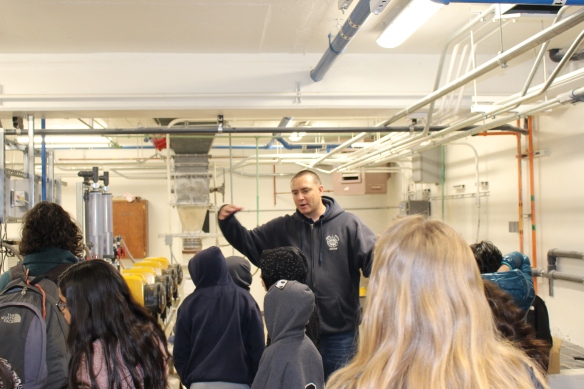 Maughan telling the students what chemicals are added to unclean water to make it potable.

Maughan advises students to be cautious in his lab, because there are dangerous chemicals present. 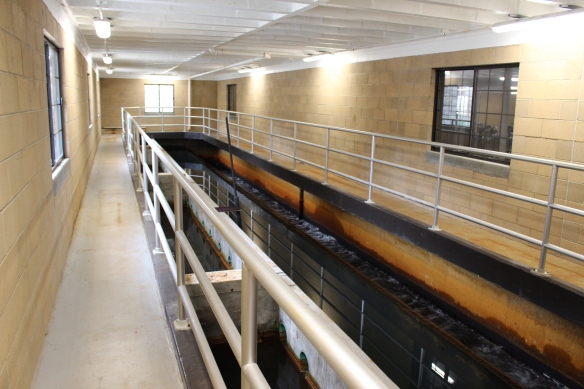 Dolata and her class watch water spill over a weir used to control water flow and filter out solid matter.

SALT LAKE CITY- On March 4, 2012 the Gould Auditorium in the Marriott Library was filled with many fans of famous author, Edward Abbey. Abbey supporters gathered anxiously as they waited for the “Edward Abbey Exhibit” to open later that afternoon.

A lecture and reception was held in Abbey’s behalf prior to the opening of the exhibit. Abbey passes away on March 14, 1989 and was a man who was famous for his environmental efforts. At the lecture, questions were raised about the way Americans live today and whether Abbey would be proud of the current society.

Ken Sanders, a man who has been in the rare books business for many years, was the speaker for the event “R. Crumb meets the Monkey Wrench Gang: Edward Abbey and the Modern Environmental Movement from Earth First!” held on Sunday. He knew Abbey personally and was very knowledgeable about Abbey’s life.

Abbey spent most of his life in Southern Utah and Northern Arizona, where he lived and worked for the state parks. He is best known for his novel “The Monkey Wrench Gang”, which has become a highly inspirational book for environmental groups.

Sanders said, “Abbey was a man that many people related to.” He went on to say, “The writing of Ed Abbey defines a group of people living in the west. We know we belong together.”

It’s been said that he moved people with his passion for the environment. According to a close friend of Abbey, Charles Bowden, “Abbey was angry with post-world commercialism, and he wanted to share that anger to motivate people to change the way they choose to live.”

Sanders shared his ideas with Abbey’s fans at the lecture. He said, “Wilderness needs no defense, just more defenders.” He also made his listeners laugh when he said, “Society is like a stew, if you don’t keep it stirring, you get a lot of scum on top.” Everyone in the audience smiled and nodded their heads.

Most everyone agreed that Abbey would be disappointed with the changes that have occurred since his death in 1989, especially how the government wants to privatize all the public land in Utah. Most believe that if Abbey were alive today, he’d have a lot to say about this issue.

Jonathon, a recent Utah graduate and fan of Abbey said, “It’s up to us to do something about it.” He explained that Americans are only concerned about money and said he believes that more people should live the way Abbey did. “He struggled to make a living, but he was proud of his work.”

Mary, a woman who works for the Marriott Library, has been a fan of Abbey for many years. She agreed that Abbey would be disappointed in the changes that have occurred, but is hopeful for what lies ahead. She expressed, “I think Abbey would be proud of the Occupy Wall Street Movement. It’s something he would have supported.”

Mary also explained, “the new collection is a step in the right direction to make people aware of what Abbey was all about.” She believes that if younger generations become familiar with him, changes can be made to the way Americans live their lives and treat their environment.

The Edward Abbey Exhibit holds over 30 years of collected work by the author and will be held on the 4th floor of the University Library. Everyone is encouraged to visit the exhibit. Getting to know Abbey and his passion for the environment will facilitate change and inspire readers to think twice about how their actions effect the environment.