Story and photos by LISA HENDRY

In the center of Salt Lake City, on the corner of 15th and 15th, crammed between houses is a bookstore that could be missed in an ill-timed blink of an eye.

As you walk through the old faded blue door of The King’s English, 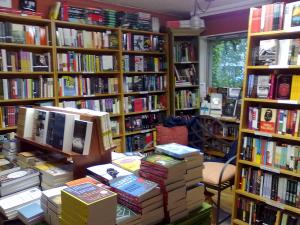 you hear the gentle tinkle of a bell and enter into a world of literature. No structured shelves or chain-store uniformity can be found here, just wall upon wall of titles and spines, in differing colors and textures. Books. People crowd in and out of the narrow hallways, say hello to the familiar faces or settle into worn wicker chairs adorned with blankets for a nice place to read.

Paul Rose is a local resident and frequent customer of The King’s English. On a Monday evening, he can be found wandering the store with his son in a stroller looking for a new book. Rose is one of the many Salt Lake residents who has become acquainted with the bookstore and is on a first-name basis with all the booksellers.

“It’s nice that we live in walking distance, but we spend far more money here than we should,” Rose said. “Our son likes books, I like books, and we read a lot.”

It is not only the books that attract people to this local bookstore, but also the friendly environment and commonality book lovers find within its walls. They all share the enthusiasm that comes with recommending a favorite book to others and the adventure and excitement of a new read.

Among the familiar faces is Anne Holman, who as manager of The King’s English spends her days sharing her love of books with others.

For Holman, books have always been a major part of her life. Growing up, Holman’s father worked in a retail company called Skaggs and his job took him all over the West. From Salt Lake to Phoenix, Denver and Dallas, Holman spent her childhood moving from place to place, always with a book in tow.

“Even if I didn’t know anybody in a new town I always had a book or I could always go to the new library; and that was always the first thing I did,” Holman said. “It’s where you want to spend your time.”

Holman’s love of books continued into college as she attended the Miami University in Ohio while her family lived outside of Cincinnati. Sparked by her enthusiasm for reading, she majored in English literature.

Finally, Holman stumbled back to the place where she was born: Salt Lake City. Although she had frequently moved around, the feeling of home seemed to ring truer for Holman in Salt Lake than anywhere else. Holman was looking for a part-time job. She discovered The Kings English, an independent bookshop that was established in 1977 by Betsy Burton as a safe haven for readers. The shop was known for its vast selection of children’s books and involvement in the community. Holman took the job. It was a perfect match.

“I was one of those people who said my dream job is to work for a bookstore,” Holman said. “I never did that coming out of college because I didn’t think you could make a living out of it. I was delighted to find out that it’s a great industry and a lot of people make a living doing it. So I feel like it was a happy accident.”

Now manager of The King’s English Bookstore, Holman has worked there 13 years and has become part of its legacy. In such a small company, everyone does everything, Holman said. Even as a manager she takes out the trash, answers phones and helps out on the floor.

Holman’s main focus is planning events and book signings. As part of its local charm, The King’s English hosts book signings of Utah’s many local authors, readings on the patio, an annual New Year’s Day sale and in September 2011 threw a party for its 34th anniversary.

The bookstore has seen many successful turnouts and returning authors to its events. Acclaimed children’s author Lemony Snicket has visited Salt Lake multiple times for book signings. His signings were met by hordes of eager fans, and went as late as 2 a.m. as Snicket would laugh, sing and play the piano for his readers. Local authors such as Shannon Hale, author of “The Goose Girl” series, have also made several appearances at The King’s English. It is these events that make the book business worthwhile to Holman and bring out the very best of books.

“These are the real celebrities,” Holman said. “And this is what literature does. It transforms people into who they want to be.”

Holman gets to see and participate in this transformation every day as a bookseller. By engaging with the books she sells and the people who come in the store, she helps readers become who they want to be.

In her book, “The King’s English,” founder Betsy Burton explains the joys of a bookseller. “We’re natural born matchmakers, and the truth is that most of us would do anything to sell a book,” Burton wrote. “But not just any book, and not just to make a buck. … The real pleasure in bookselling comes in pairing the right book with the right person. That’s what drives us as we look. Listen, assess, and ask questions … until bingo! We come up with a match.”